Happy Halloween! Sorry I don’t have a story for this post but I wanted to get started back into my blogging after my unexpected break and a couple of my sponsors had wonderful stuff out for Halloween that I wanted to share. Both of the events that Adoness is in end today so hurry on over and nab them. Her new hair and eyes are gorgeous. 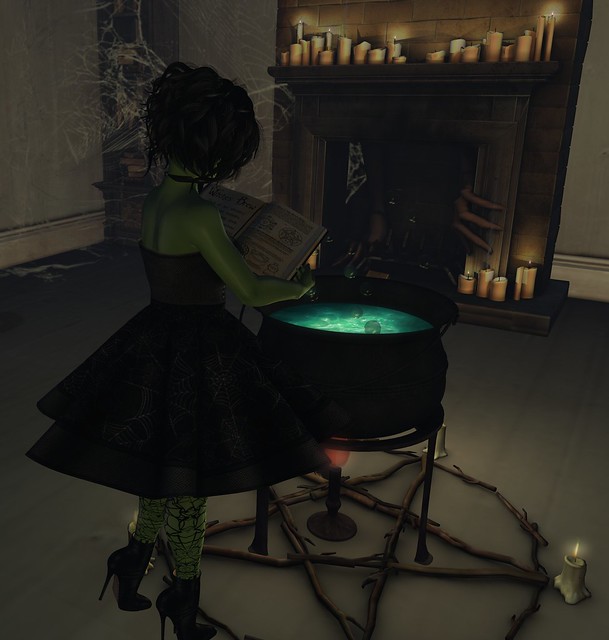 Lumae is in the process of renewing her store and skins. All of her skins will be retired after the New Year and be discontinued. All of her older skins are for sale for 100L. Her newer ones, Jewel, Adore, Niska and Fae, are at 50% off. If you want more information on this go read her post here. The Wicked skin I am wearing is out in store for 100L until November 6th. She also has a really cool Halloween freebie called Lady Death out in her store. 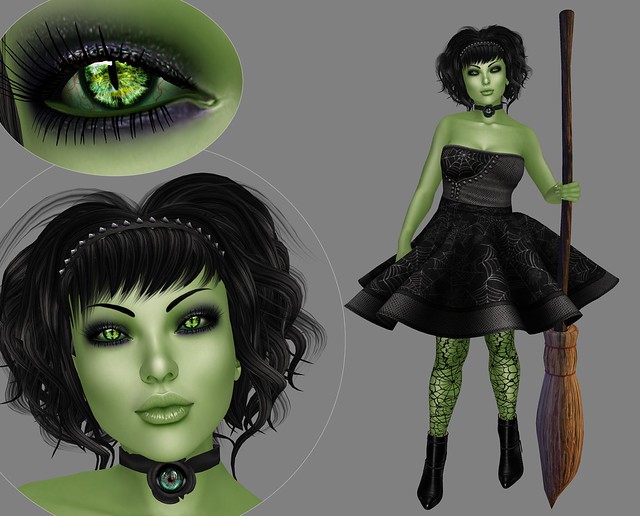 And finally the location for the first couple photos is a wonderful photography sim called Ironwood Hills. In their own words it is “a post-apoc town loosely based on Silent Hill.” It has zombies and ruined buildings, an abandoned amusement park, steam punk forest, etc. I used their haunted house called Yardley Manor.

Boots – KC Couture – Carly Boots / Heels (MP – They have mesh with fits for multiple bodies and shoes including Slink, Belleza and Maitreya with color change huds at good prices.) “Ay Dios mio, Ali! You have five minutes to get down here or I’m leaving your butt behind!”

“Oh chill Blanca. It’s not like the party will end before sunup anyways. Besides its fashionable to be late.” Ali said as she came down the stairs and smiled at her friend.

Blanca pulled her pocket watch necklace up and gazed at the time. “We were fashionably late over an hour ago.” She paused as her cellphone dinged and she flipped it open to check the newest message. “Not to mention the five million texts I’ve gotten in the last hour asking where we were from Hati and Chessa.”

Ali laughed and grabbed her keys from the table by the door. She paused to lock the door behind them and then linked her arm through Blanca’s and started off down the street. “We’re only a couple blocks away from the club. It’ll take all of five minutes to get there. Besides it took longer than I expected to get my hair this light.”

“I don’t know why you die it black to begin with. You’re natural blonde looks great on you.”

Ali gave a small snort and said, “I got tired of the stupid blonde jokes.”

“So instead you chose to put up with the goth jokes?”

“Hey people may call me emo and tell me to get some sun, but the goth jokes are no where near as bad as most of the blonde ones.”

Ali and Blanca paused at the club door to flash their IDs and hand over the entry fee. The door opened and they waded into the wave of people dancing to the loud music. They looked around for a moment before Blanca caught sight of Chessa and Hati and pointed them out to Ali. They grinned at each other and began to dance and weave their way across the club.

Sorry this is so late. The Alice in Sexyland event just ended yesterday. >< I have been working on it most of the week. I decided to update one of my alts and get her a mesh body and slink hands. Then because of all the storms coming through the net has been terrible. I dual-logged and crashed a ton, but I finally got the photos I wanted! There are 2 more parts coming ASAP as well as me catching up with stuff from sponsors and events.

Skin – Lumae – Adore – Ocean Makeup in Tone 2 (75L Lazy Sunday makeup will be up until at least July 4th at the store.)

Necklace – The Little Bat – Drink Me Necklace (@ Alice in Sexyland)

Prop/Poses for Photo 1 – Exposeur – The Keyhole

As you may have noticed I like many styles. However Fantasy and Punk are definitely my favorites. 🙂 So here is my version of punk version of Little Red Riding Hood / Big Bad Wolf.

I didn’t want her to be a grungy punk so much as an elegant one. The jewelry and tattoo along with the hair I think helps with that. 🙂 Below is closeups so you can see all the wonderful details. 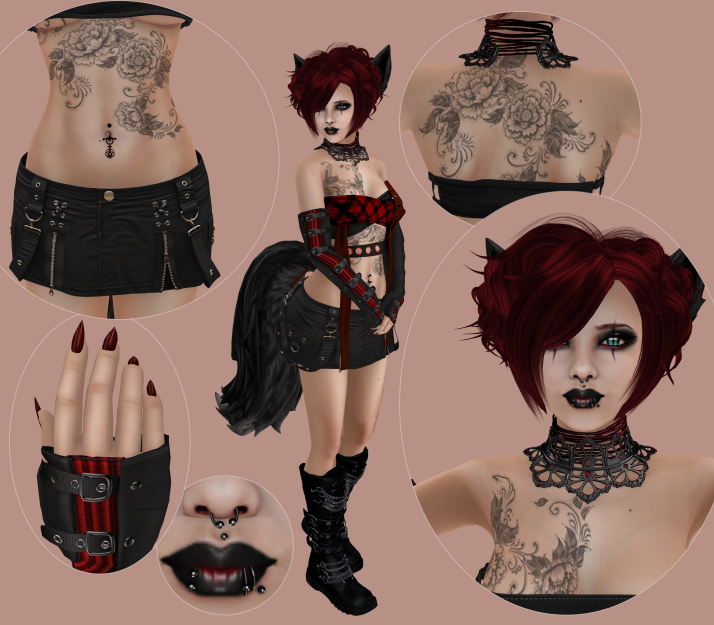 Facial Piercings – Hebenon Vial – Against the Stream in Ink

Necklace – Aisling – Dangara – Collar (A rare from her Gacha in the last Fantasy Gacha Carnival. Has a hud to change colors and metals.)

Tattoo – Things – Eden (Discovered this store at the Skin Fair 2015 and fell in love!)

Shirt – Revolt – Luna Strapped Top – Red Plaid (Has a hud to change the color of the straps and metal rings.)

Gloves – Razor – Foe Gloves – (Has a version to fit Slink! And lots of color options in the hud.)

Skirt – Blueberry – Bisquit – Zipped & Strapped Skirt in Black (There is color change options for the straps, metal, pockets, and leather zippers. However the red on it didn’t match the rest of the outfit.)

“Be yourself, everyone else is already taken.” ~Oscar Wilde

Today I wanted to show off some of the great things I got from a few of my favorite stores. First off the prop I am posed on in the above picture is Exposeur’s Red Light District from the Whore Couture event. It has a lot of nice poses and I love the details on the mesh. My dress is from Razor and also from the Whore Couture event. I love how Razor puts so many options on their stuff. I can change the color and textures of the strings, arm piece, strap part in back, sheer part on back and the shirt itself. The last piece I wanted to highlight were the awesome barbed wire heels from MV. Below is a picture in better light with some closer ups. 🙂 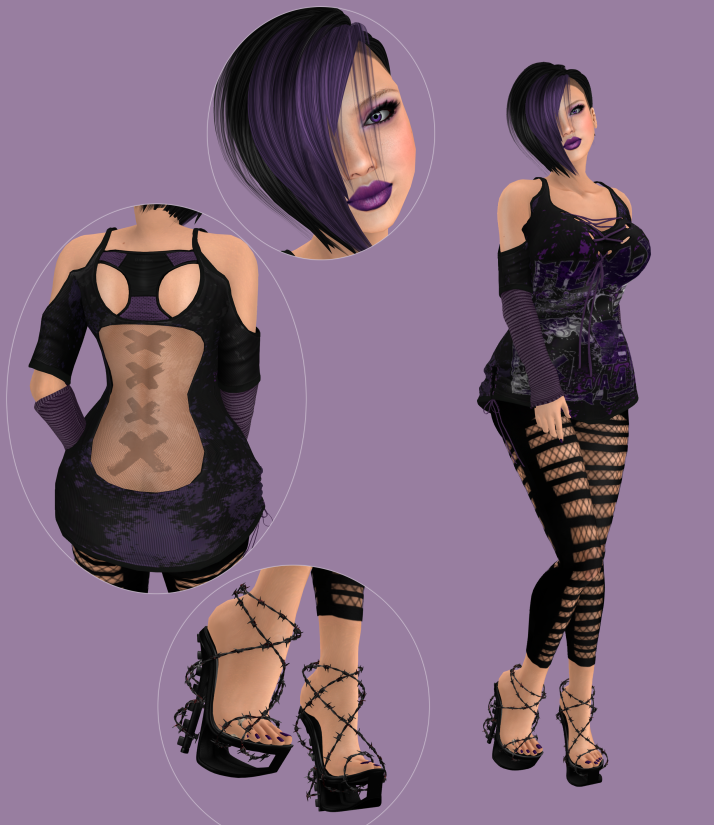 Pose for the second photo is Atteris from Bauhaus Movement 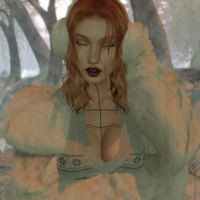 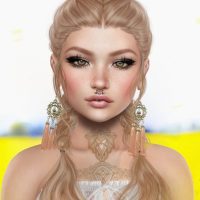