N’Mara had heard some other faire goers talking about the magnificent ancient Egyptian area of the faire and knew she had to visit that one next. Ancient Egypt had been one of her very favorite times. She changed into an outfit more appropriate for Egypt’s heat and used the teleport scroll to enter The Golden Delta.

She smiled at the Delta’s authenticity and began to wander through the shops set up in a series of small pyramids. Occasionally she would pause to sit on the plant strewn platforms under a statue, not due to heat or tiredness, but rather to enjoy its tranquility among the blowing sand. 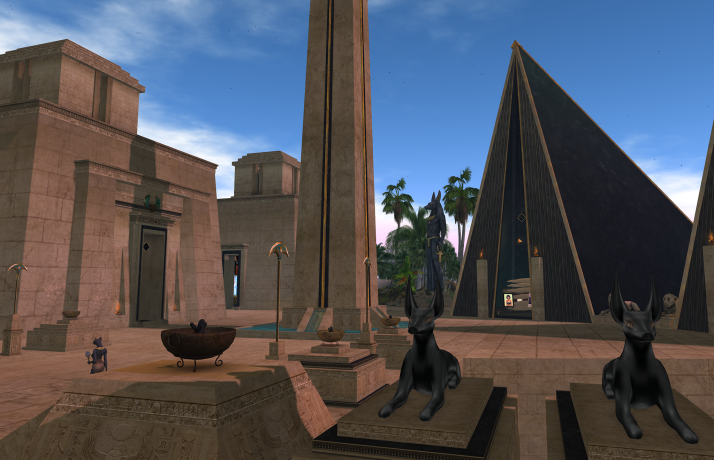 As she wandered among the shops she saw a temple area above some and headed towards them curiously. She climbed the stairs and found a small group of people sitting watching a young woman speak. She went closer and realizing the woman was telling a story settled down with the others to listen.

The woman told of the gods and goddesses of Ancient Egypt and how a small town much like The Golden Delta use to exist but was lost to the ravages of war and buried by time. As she told stories of the towns prosperity and how the gods and goddesses walked among the humans in that long ago time she gestured to statues and landmarks behind her in the Delta below.

Sorry N’Mara has no image this time, SL kept crashing on me making it almost impossible to get the pictures of the storyteller let alone pictures of N’Mara as well. I also noticed when I was doing my composite photo of the storyteller that the bellybutton on the skin is kind of weird, although that could have been it not fully rezzed because the details of the pants were blurred some. Here’s the current Relay for Life donations so far at the faire – L$ 3,513,516 ($ 14,054) by April 26th.