N’Mara had heard some other faire goers talking about the magnificent ancient Egyptian area of the faire and knew she had to visit that one next. Ancient Egypt had been one of her very favorite times. She changed into an outfit more appropriate for Egypt’s heat and used the teleport scroll to enter The Golden Delta.

She smiled at the Delta’s authenticity and began to wander through the shops set up in a series of small pyramids. Occasionally she would pause to sit on the plant strewn platforms under a statue, not due to heat or tiredness, but rather to enjoy its tranquility among the blowing sand.

As she wandered among the shops she saw a temple area above some and headed towards them curiously. She climbed the stairs and found a small group of people sitting watching a young woman speak. She went closer and realizing the woman was telling a story settled down with the others to listen.

The woman told of the gods and goddesses of Ancient Egypt and how a small town much like The Golden Delta use to exist but was lost to the ravages of war and buried by time. As she told stories of the towns prosperity and how the gods and goddesses walked among the humans in that long ago time she gestured to statues and landmarks behind her in the Delta below.

Sorry N’Mara has no image this time, SL kept crashing on me making it almost impossible to get the pictures of the storyteller let alone pictures of N’Mara as well. I also noticed when I was doing my composite photo of the storyteller that the bellybutton on the skin is kind of weird, although that could have been it not fully rezzed because the details of the pants were blurred some. Here’s the current Relay for Life donations so far at the faire – L$ 3,513,516 ($ 14,054) by April 26th.

Lots of news to share! I wanted of course to showcase some of my sponsors new releases at both the Pose Fair and the Skin Fair, as well as use a couple of items I fell in love with at first sight. Gauze revamped their Chronicle skin series and added appliers for Catwa

Jessica and Annie heads, Omega appliers (with face), and TMP. There is also an eyebrow hud with 5 different eyebrow shapes and they have a base of white, black, blonde and red for mesh heads that can’t be tinted. As you might have noticed I don’t have eyebrows in these photos but that is because the LOGO Alex head only has one omega applier layer. The skin is still gorgeous in my opinion. 🙂 Here is a picture showing all of the colors. The skins are sold separately for 400L a skin, 800L for a 4 pack of the skins, or 3600L for all skins. I also love their Asgard Eyes with animated lightning so I had to take a gif of it to share with you all.

Next up is Something New Poses and Props contributions to the Pose Fair. Next to the Fantasy Faire this is one of my favorite Fairs in SL. This year they tried to do a little bit of everything: family, singles, couples and prop poses. I loved the Mixed Emotions set as well as the Red Carpet pose. The Red Carpet Pose is a couple pose but I used it as a single. You can see how it looks with both people here, as well as the other poses they have at the Pose Fair.

My other news is that I will have limited internet access over the next couple weeks as I move into a new house. This is a move I have been trying for for a while so I am really excited to have found a new place that I can’t wait to call home. I will have to be careful as I move so as to not take along the bedbugs the apartment I am leaving has acquired from another apartment in the building. So please bear with me. 🙂 I promise to be back as soon as I can.

Hair – Spellbound – Sirena Hair and Headpiece and Adornments in Colors 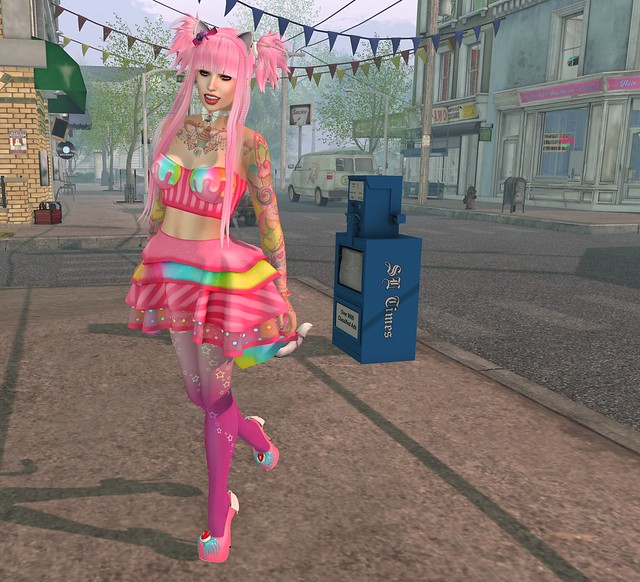 Sakura walked through the small town her ears flicking to catch all of the new sounds. She hadn’t been here before but she had been hired to sing in a small cafe and was on her way to rehearse. There were only a few people on the streets as she followed the directions her friend has sent her. She spotted the little cafe and crossed the street to go inside. 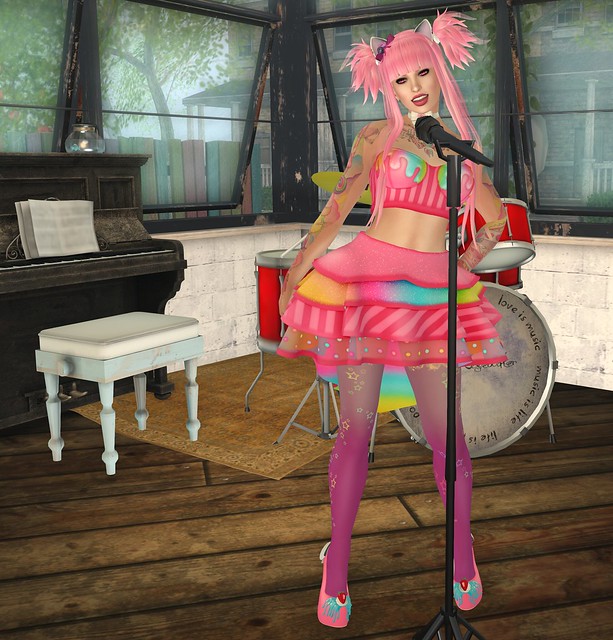 She smiled and wound her way through the tables where a few people sat sipping coffee or tea and munched on small sandwiches towards the counter and the person behind it. After a brief conversation where she introduced herself to the owner and asked permission to rehearse a song or two to get a feel for the stage and sound she stepped up onto the small stage. She introduced herself to the crowd and after pulling up the background music track on her cell phone sang a soft ballad followed by one of her more upbeat songs. The patrons smiled and clapped when she finished. She waved and told them she would be back that evening before skipping her way back out and down the street to explore a little. 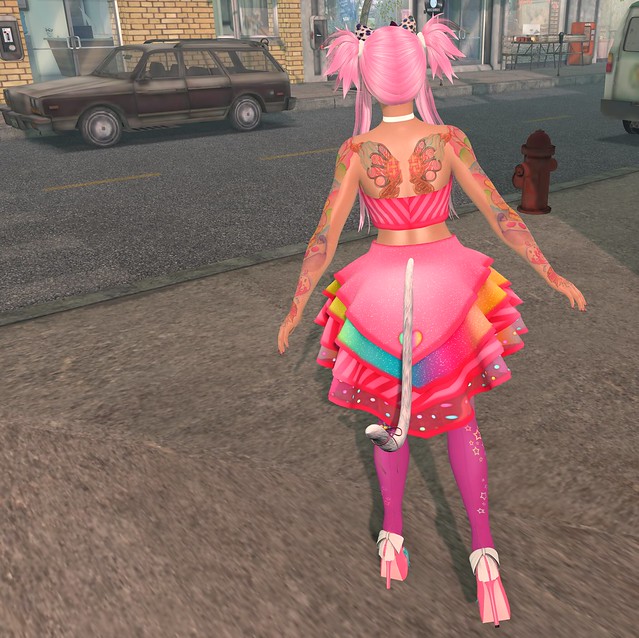 She had noticed a small park with some pretty flowers near the coast when she had entered town and made her back to it. The sun was out and warm. She paused on a street corner and stretched her arms up and bowed her back as she waited for the light to change to green. A few moments later she found a quiet spot among the grass and flowers and setting an alarm on her phone curled up for a catnap with a purr.

This post turned out way more pink than i originally started with, which since I am not a pink person generally is abnormal lol. But I wanted to use some new cutsey items from a new store and then I came across the cute tattoo and it all went downhill from there.

Someone in the SL Blogger Support group shared this location and I knew I had to use it at sometime soon! Its such a nice town. You will likely see it again in the future.

Pose for Photo 4 – Ransie2 Oleander – K02 (Can’t find it in either of her marketplace stores anymore and it’s in my PoseAnywhere 2 Hud so don’t know anything other than the creator’s name and pose name, sorry!)