Konohanasakuya-hime stepped out into the garden and took a deep breath of the new spring air. She looked around at the budding trees and flowers and smiled. The time for the flowers and trees to bloom had come. She closed her eyes and gathered her magic in her hands. To an outsider it appeared as an orb of flower petals. When it was big enough she threw her arms wide and scattered the petals in the wind.

The wind caught the petals imbued with her magic and carried them in all directions. As the petals passed the buds on the trees and ground they began to open and bloom. The garden was soon filled with sakura blossoms and their sweet smell. Konohanasakuya-hime is the japanese blossom princess. She symbolizes delicate or fragile earthly life and her symbol is the sakura blossom. She makes the flowers and sakura trees bloom. She is the daughter of the mountain god Ohoyama.

If I got any of that wrong I apologize. I got the info from multiple internet sources that all said roughly the same thing. The short scene above is my own imagined scenario that also fits with the photos. Also a good part of the items in this post are from the Origami Event back in March. Sorry it took so long but I wanted to wait until I had everything I needed to make the best possible look. 🙂

As many of you know I mostly only use Lumae and Fallen Gods skins with the occassional skin from Soul or Plastik. However I saw this lovely skin in Seraphim’s preview of The Fantasy Collective and had to have it! This beautiful skin from Your Skin Your Shape (YS&YS) is one of their fantasy tones for their Ginny Skin. It comes with appliers for the Lelutka mesj heads as well as for the Maitrya mesh body and Slink’s Physique. Below is the ad and a photo of the hud. Along with the 5 skin options, 6 hairbase colors, 3 eyebrow options, 8 makeups, and 10 lipstick colors on the hud, you also get a set of pointed mesh ears in the skin color and 6 fantasy eyes. 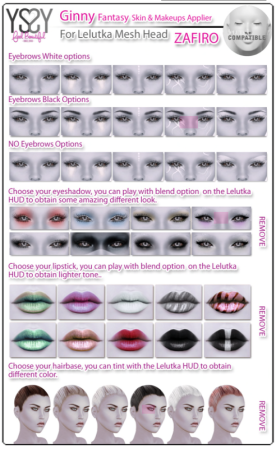 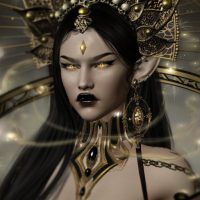