Sorry no story today, but I was inspired by Lumae’s new skin and had to create a look to share with you all. Solaris is a group gift out at the mainstore and is a wonderful peek into her new skin-line. It’s tone made me think of the sun, as did the name. So here is what came of my sun inspiration. I think the new KOI Last Unicorn dress from EVE at Enchantments newest round looked wonderful paired with the skin.

I also wanted to show Adoness’ new hair, Baldur, which is out at Flower Power. Paired with Plastik’s Galaxie eyes and the particles, the look came together almost as good as I imagined. 🙂 Hope you enjoy it! Maybe she’ll speak her story to you when she has kept it secret from me.

Pose in Photos 2 – Something New Poses – Desire Me

Lily felt a slow falling sensation, almost as if she were weightless, and furrowed her brows before slowly opening her eyes. As her vision cleared she realized with a shock that she was underwater. She fought the need to breather and looked around to discover that she was far enough down to see the taller plants and only faint beams of light from above. To her left a sunken pirate ship came into view.

She tried to move her limbs and propel herself toward the surface but they wouldn’t move. She fought panic as her lungs started to hurt from lack of fresh air. She felt herself settle on the sandy bottom and squeezed her eyes closed on the darkness starting to creep across her vision. She tried again to move her arms or legs, anything that she could use to push off the sea bottom and get to the surface and the oxygen her body needed. Her lungs felt like they would burst if she didn’t take a breath soon. 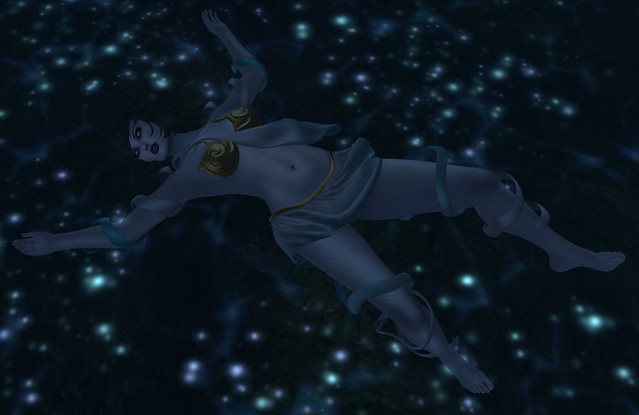 Her mouth opened and she took an involuntary gasp of breath and her eyes snapped open. She lay panting looking up at a white ceiling. A face appeared above her and the last tendrils of confusion cleared from her mind.

“You okay down here?” The man gave her a grin and chuckled slightly.

Lily tried to sit up but found herself still unable to move. She looked down and realized that not only was she completely tangled up in the sheets, she had also ended up on her bedroom floor. She groaned and dropped her head back to the floor. “I’ll be fine in a moment. Just let me catch my breath and then help me get untangled.” 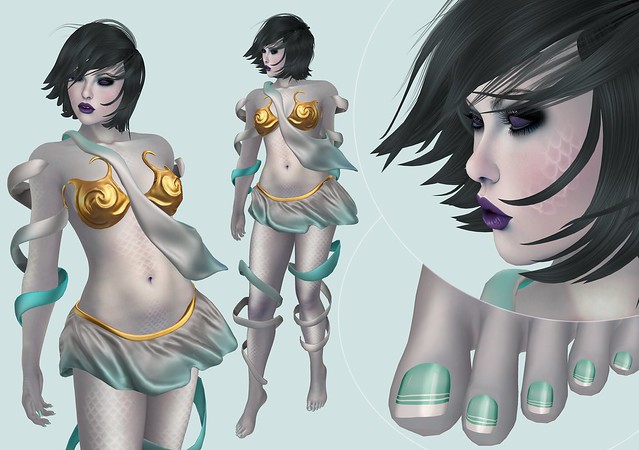 Sorry some of my items are from events that just closed recently. I have had a week or so of being uninspired. I have multiple characters ready to go for three or so other posts, just no story or photos for them yet. However when I saw this skin I immediately knew what I wanted to do with it and couldn’t wait to get it up! Lumae has done a beautiful new mer skin for the upcoming round of Enchantment. The theme this round is “The Little Mermaid”. It’s a fantasy tone on her Adore skin with 5 different make-ups to purchase. Each will only be 100L at the event. She will also have a pink-purple toned version out as a hunt gift in her store during the event’s time. Here is the current list of appliers Lumae skins include: Omega Body and Head, Omega Yabusaka Petite Body Applier (use in conjunction with Omega head), SLink Multi HUD (Hands, Feet, Physique) and Visage, The Mesh Project Body and Head, Maitreya Body, Belleza Body, LeLutka Head, Eve’olution by Absolut Creation, Genesis Lab Appliers (works best on Chloe Head), AMD Baby Bump, Loud Mouth, Nyam Nyam, Sweetlips, Kissers, Soul Ears (not the mermaid), and her own Leevi Ears in matching tones. This skin also includes 3 eyebrow options with both facial scales and without.

Later this week I’ll get my other posts ready and up. One is filled with the newest items out at Fair Play’s August Round. Another is featuring a new store called Glitter Trash. The last one is the one I’ve mentioned before about a battle between good and evil. 🙂 Thanks for sticking with me and I hope you enjoyed the story and photos!

Pose for Photo 1 – Something New Poses and Props – Suspended

Pose for Photo 2 – Something New Poses and Props – Fallen Angel