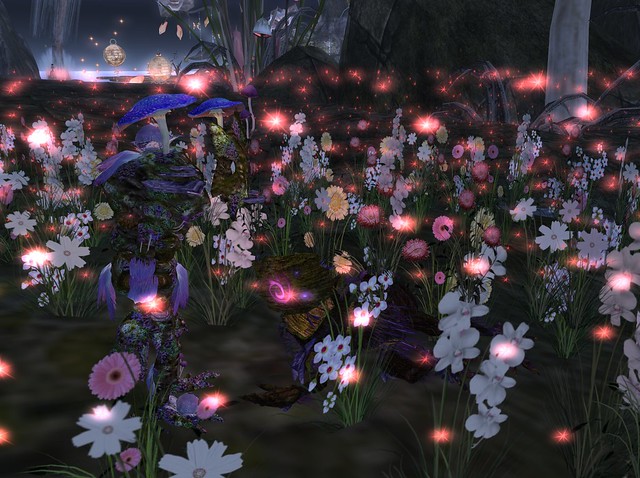 Ylani clawed her way back to consciousness and lay for a moment before opening her eyes. The sight of flowers towering over her confused her, but before she could wonder about it too much a strange glowing bark mask appeared above her. Startled she went to sit up and groaned as she saw her body. The last thing she remembered was the Japanese area and dancing with the fairies… oh and the angry goblin. She sighed and looked up at the collection of wood, moss and mushrooms gathered into a sort of humanoid shape with a glowing mask for a head.

“Hello. May I ask where I am? And what I am?” She asked the creature in front of her.

“You are in Ichi-go Ichi-e at the Faire.” The creature said in a soft feminine voice cocking her head sideways as she continued, “How do you not know you be a tinderling?”

Ylani stood and searched through the vast library in her mind. Tinderlings were mentioned briefly in The Apprentice Journals. They were manifests of a land’s life force sometimes also called the keepers. She gave the other tinderling what she hoped was a smile, although she didn’t see a mouth per se, and replied, “It’s a long story. Maybe I could tell you over some refreshments?” The other tinderling nodded and beckoned for her to follow.

They went to a nice outdoors cafe run by some fairies and took a seat. While they waited for their tea and cake Ylani told Shari, the other tinderling, about her travels to the faire and how it had all been going very well until her and the sakura fairies woke a goblin. the last thing she remembered was him casting magic on her. Their food and drink came and she stood on the stump to reach for it only to pause. The tea was a funny green color.

Shari opened her maw and shoved cake in noisily.

Ylani dipped a finger in the tea and asked, “Are you sure this is safe?”

Shari bobbed her head and said, “This is the Faire Folks Tea of Wonders.”

Ylani looked down at it doubtfully then lifted it and carefully took a sip. She had just finished the slightly bitter drink when she started to glow and felt her body changing. Shari slurped the tea through her finger and nodded seeing the swirlings begin. She glanced down at the Fennux under the table near their cake and rustled letting off some mushroom puff at it. Looking back up and seeing the transformation end she nodded and said, “It worked.”

Ylani sighed at her new look and shook her head sadly, “No I’m still not right. I am a silver dragoness.”

“I’m sorry to hear that. I hope you regain your true shape. For now I must go. Remember, once you have been here and seen the Fae Cafe you cannot speak of it to the tall ones. You must only ever come back here in times of dire need and seek me nearby growing somewhere.” Shari hopped down and disappeared in the nearby grass.

Ylani stood and after thanking the fairies she decided she may as well wander this new area and make some more purchases to benefit the cancer sufferers.

Whew, sorry it was another lengthy one. Thank you so much to the lovely Shari Cortes for joining me! Oh what fun it was. 😀 I used some of the little roleplaying we did as well. And a huge thank you to ColeMarie who happened by and passed us the pretty particles used in the transformation! As soon as Shari shares her link with me I will add that here so you can see her post as well.

Cerridwen’s Cauldron – Tiny Forest Tinderling RFL Ed. (@ Fantasy Faire 2015, this is a RFL item and its a 2 pack that includes a normal sized version and a tiny.)

Outfit from after the transformation will be in Part 2 as will the credits for it. 🙂

Credits for Shari: Her post! Go check it out!

Cerfantasyridwen’s Cauldron – Tiny Mushroom Tinderling RFL Ed. (@ Fantasy Faire 2015, this is a RFL item and its also a 2 pack that includes a normal sized version and a tiny.)

Info on the Tinderlings that Ylani paraphrased is from Cerridwen’s Cauldron’s notecard. The full text is below. Thank you Elicio for your wonderful creations. 😀

“We walked as stealthily as we could through the thick forest’s underbrush, with Sharian the Old grunting each time his wizard’s robes got snagged in a twig or branch. We had been searching for weeks now for this new kind of Fae. According to the region’s druids, they were a manifestation of each land’s life force. I parted a frosted bush and stilled a yelp; there, between two red leafed, frosted birch stood what appeared to be a collection of pieces of wood, leaves, ferns and whatnot in a roughly humanoid face; with a “mask” with a glowing rune and eyes. We had found them, the keepers, the Tinderlings!

The Fae Guardians
The Apprentice’s Journals”